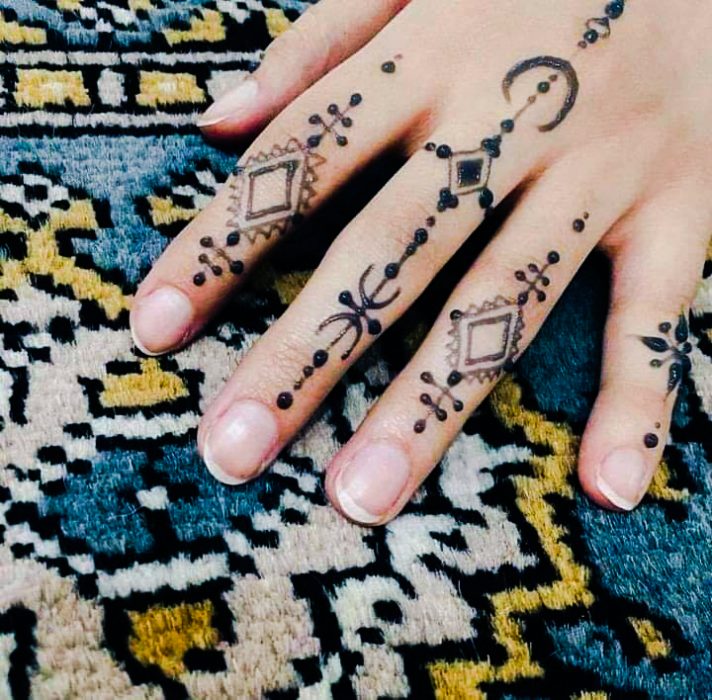 Posted by Morocco Tours official on November 30, 2021 | Featured | No Comments

Henna is considered the companion of women all the time, especially on happy social and family occasions, and also for decorating the body and freshness of the skin. Henna, on the other hand, is associated with some popular beliefs and customs that make it either a good omen or a bad omen that may harm women, especially girls and newly married ones, which raises several questions about this strong presence of henna in the imagination and mind of Moroccans and their daily lives.

Henna in the Berber Culture

What attracts Amazigh women to henna is its many benefits from the health side, and at the level of what it gives to the body of natural adornment and freshness, and among these benefits is its use by many women in dyeing the fingers, feet, and hair as well, it gives it the required strength, and it treats scalp from dandruff problem.

Moroccan women also use henna to treat headaches and migraines, cracked feet, and fungi that take place between the fingers, and to treat some tumors by kneading henna and placing it on them for a specific time. Some women prefer to dye their hair with henna instead of resorting to dyes, which mostly contain chemical substances that harm the hair strands, its roots, and the scalp as well. Thanks to the use of henna, women get red hair by mixing henna with lemon juice, and some other materials such as coffee and egg whites to obtain A cohesive dough, then a mask is applied to the hair.

The presence of henna is more prominent in the Amazigh community on happy social occasions, especially, where the occasion of the wedding or the aqeeqah (the Islamic tradition of the sacrifice of an animal on the occasion of a child’s birth), for example, hardly passes without the presence of henna adorning the hands and feet of the bride and sometimes the groom’s hand as well, or the palms of the newborn, and even the attendees invited to these happy parties.

In Amazigh weddings, the bride is decorated with henna by the nagafa, which is the woman who specializes in preparing the next girl at the wedding, decorating and dressing her in beautiful traditional costumes. This night of adornment is called the henna night, and only women from the two families of the spouses are summoned to it, during which the bride and henna are celebrated together, as the girl remains sitting for a long time in front of the discussion, which adorns her hands and legs with clear deliberation until the artistic form of the bride’s parties comes out in the most beautiful view because it is the night of a lifetime For the bride and her husband, it is necessary to ensure that decorating the girl with henna is appropriate and beautiful.

The rituals of decorating the bride with henna are mixed with chants and lyrical meows of chanting the girls and women present, and sometimes by a singing band that celebrates that special night with the henna until the bride finishes dyeing her hands and feet with henna, and at the same time, the attendees throw coins on henna dishes that are usually next to molds Sugar and eggs, which are substances that symbolize whiteness and indicate optimism for a happy life between spouses. And the same celebrations on the Day of the Aqeeqah when a new baby is born. Henna is strongly attended to adorn the mother and her child as well, and the Aqeeqah resembles a wedding as a mini-wedding, but henna remains the most common in the Aqeeqah. Even on religious occasions such as Eid al-Adha, henna is strongly attended by Berber families, as many women paint the front of the head of the Eid ram with henna in optimism and blessings, and also on Eid al-Fitr, women and young girls draw on their hands’ distinctive forms of henna.

Henna is also present in exchanged gifts, as families in some areas are keen to honor their female guests by stipulating that they do not leave until after adorning themselves with henna in religion and the men too, as evidence of the generosity of hospitality, a custom that the residents and people of the Sous region were famous for in general.

Because henna has a lofty position in the Amazigh society, it has become an obsession that has become a belief in its power and impact on the life of the individual, given that there are many Berber families believe that not dyeing the bride with henna on her wedding night is a bad omen and a bad omen for her and even for her relatives of the girls who are about to get married, Therefore, they are very keen on seeking blessings from henna, even by placing a small portion of it on their hands in a circle.

Among the other popular beliefs in the Amazigh society, like many other societies, is that the frequent use of henna throws tenderness and kindness in the heart of a woman and makes her beloved by people, and the spinster girl puts henna leaves on her neck in the form of a necklace that allows her the possibilities of marriage, but the strangest of these beliefs It lies in the belief that sitting under the henna tree at night is touching because it is a shelter for the jinn. But the interesting thing about the presence of henna in most of the scenes and spaces of Amazigh life is that dyeing with henna is a necessary ritual for many people. And henna in the Amazigh society is not only a substance to dye the legs and hands and decorate the body, but it is also for some women an indication of showing strength or expressing openness, and for others, it is an indication of imitation of others.

The henna engraving is one of the ways to show the openness of many teenage girls, and henna is no longer material for older women such as mothers and grandmothers but has become engraved on the arms, legs, and lower back of indicators of openness to the times and keeping pace with modern fashion trends.

Morocco Sahara Desert Tours offers special and unique experiences of our beautiful Morocco through our expertise, knowledge, and understanding. Visit our website to learn more about our services. https://moroccosaharadeserttours.com/